"Presentation at the Temple" Collection of St Philips, Charleston SC

Done! The artist with his finished work

Rest on the Flight to Egypt, oil on canvass

Rest on the Flight, detail

Rest on the Flight, Mary

Framed and ready to hang. For reference, the man on the left is 6'4" tall.

Lifting the picture into place

Study for "David and Goliath"

Detail of "David and Goliath" 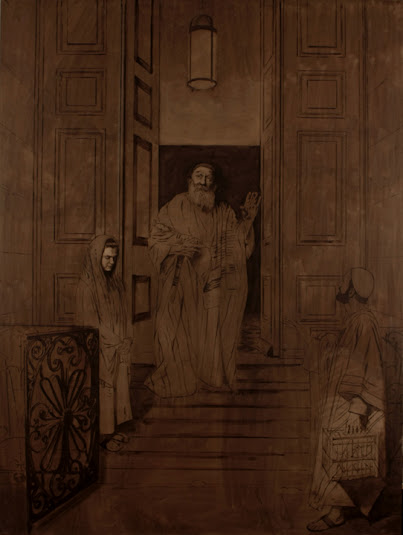 History painting, the depiction of historical events, has long been  held in the highest regard among artists and patrons in the tradition of western art. From Medieval altarpieces to Michelangelo to Rembrandt and from tender, quiet nativity scenes to pictures of fierce military conflict, the painting of dramatic moments

in history has held a central, exalted place

in European and early American art.

With the rise of Modernism, however, the painting

of  historical scenes was deemed old and stale. It was assumed that people weren't interested in such

things any longer and the genre fell into neglect.

Several years ago I began a number of projects almost as

a dare to myself. I wanted to see if people were, indeed, still interested in the "old and stale" historical subjects. The first was "David and Goliath." Commissions followed, some of which you can see here.

Perhaps the one I am most fond of is the painting that hangs in St Philips Church here in Charleston. Not only were the rector and vestry of the church enthusiastically involved in the project, but the painting was

very warmly received by the congregation.

I consider the hanging of the painting one of  the highlights of my career. Scroll through the gallery for pictures of the hanging.